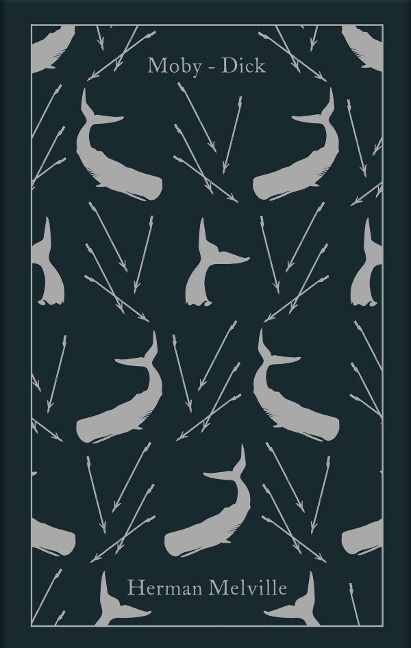 Part of Penguin’s beautiful hardcover Clothbound Classics series, designed by the award-winning Coralie Bickford-Smith, these delectable and collectible editions are bound in high-quality, tactile cloth with foil stamped into the design.

Or, the Whale
Von: Melville, Herman

Part of Penguin’s beautiful hardcover Clothbound Classics series, designed by the award-winning Coralie Bickford-Smith, these delectable and collectible editions are bound in high-quality, tactile cloth with foil stamped into the design. In part, Moby-Dick is the story of an eerily compelling madman pursuing an unholy war against a creature as vast and dangerous and unknowable as the sea itself. But more than just a novel of adventure, more than an encyclopedia of whaling lore and legend, Moby-Dick is a haunting, mesmerizing, and important social commentary populated with several of the most unforgettable and enduring characters in literature. Written with wonderfully redemptive humor, Moby-Dick is a profound and timeless inquiry into character, faith, and the nature of perception. This edition contains the definitive text of Moby-Dick based on the Northwestern-Newberry edition. It also features an introduction by Andrew Delbanco and explanatory commentary by Tom Quirk. For more than seventy years, Penguin has been the leading publisher of classic literature in the English-speaking world. With more than 1,700 titles, Penguin Classics represents a global bookshelf of the best works throughout history and across genres and disciplines. Readers trust the series to provide authoritative texts enhanced by introductions and notes by distinguished scholars and contemporary authors, as well as up-to-date translations by award-winning translators.

Herman Melville was born on August 1, 1819, in New York City, the son of a merchant. Only twelve when his father died bankrupt, young Herman tried work as a bank clerk, as a cabin boy on a trip to Liverpool, and as an elementary schoolteacher, before shipping in January 1841 on the whaler Acushnet, bound for the Pacific. Deserting ship the following year in the Marquesas, he made his way to Tahiti and Honolulu, returning as an ordinary seaman on the frigate United States to Boston, where he was discharged in October 1844. Books based on these adventures won him immediate success. By 1850 he was married, had acquired a farm near Pittsfield, Massachussetts (where he was the impetuous friend and neighbor of Nathaniel Hawthorne), and was hard at work on his masterpiece Moby-Dick. Literary success soon faded; his complexity increasingly alienated readers. After a visit to the Holy Land in January 1857, he turned from writing prose fiction to poetry. In 1863, during the Civil War, he moved back to New York City, where from 1866 to1885 he was a deputy inspector in the Custom House, and where, on September 28, 1891, he died. A draft of a final prose work, Billy Budd, Sailor, was left unfinished and uncollated; packed tidily away by his widow, it was not rediscovered and published until 1924. Andrew Delbanco was born in 1952. Educated at Harvard, he has lectured extensively throughout the United States and abroad. In 2001, Time named him „America’s Best Social Critic” and in 2011 he was awarded a National Humanities Medal. Two of his previous works, The Puritan Ordeal and Melville: His World and Work received the Lionel Trilling Book Award at Columbia University, where he is Director of American Studies and Julian Clarence Levi Professor in the Humanities. He lives in New York City with his wife and two children. Tom Quirk is Catherine Paine Middlebush Professor of English at the University of Missouri-Columbia. He is the editor of the Penguin Classics editions of Mark Twain’s Tales, Speeches, Essays, and Sketches (1994) and Ambrose Bierce’s Tales of Soldiers and Civilians and Other Stories (2000) and co-editor of The Portable American Realism Reader (1997). His recent books include Nothing Abstract: Investigations in the American Literary Imagination (2001) and Mark Twain and Human Nature (2007). Coralie Bickford-Smith is an award-winning designer at Penguin Books (U.K.), where she has created several highly acclaimed series designs. She studied typography at Reading University and lives in London.